Many people use the attic to store family heirlooms, but some hold a more insidious surprise – vermiculite insulation. Based in Toronto, Ontario, the Environmental Services Group can help you determine whether vermiculite was used as insulation in your home and if so, we can safely and effectively remove it. ESG’s team of qualified and fully trained experts have handled many cases of vermiculite attic insulation and we can help you too. Our services including vermiculite sampling, testing and removal in the GTA. 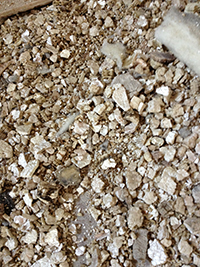 What is Vermiculite Insulation – and Why Is It Dangerous?

Vermiculite is a hydrous, silicate mineral that expands greatly when heated. Its properties make it an ideal material for loose-fill insulation where it is used to fill the pores and cavities of masonry construction and hollow block work to enhance fire ratings, as insulation and to improve acoustic performance.

In the case of home insulation, vermiculite itself poses no danger; however, the vast majority of vermiculite used in North America came from a Montana mine that was found to be contaminated with asbestos.

In Canada, vermiculite insulation is most often found in residential attic spaces. The material is either present on its own, or in combination with other forms of attic insulation such as blown-in cellulose and fibreglass.

With the form of sampling differing from other asbestos types, so too does the type of laboratory analysis to determine its presence. Zonolite Insulation (the name brand of contaminated asbestos containing insulation from the Montana mine) is distinguishable by visual characteristics to the trained eye under appropriate magnification. As such, trained analysts are able to determine visually if the vermiculite obtained from your home is typical of that from the United States or South Africa (the latter known to NOT be asbestos containing).

Vermiculite attic insulation is done as a Type 3 abatement which includes a containment set-up with a shower. Post Sampling is required.

If you suspect that your attic contains vermiculite insulation, call us today for Vermiculite Testing, Sampling and Removal Services.  In Toronto, call 416.575.6111. Free consultation.